Pioneer Water Tanks have been the best Penguin water tank supplier and manufacturer for more than 30 years.

Pioneer Water Tank owners in Penguin rest easy in the knowledge they have the support of Australia's number one big tank supplier.

Although much of the mainland hold the belief that Tasmania is a grassy land of plentiful rains, people in Tasmania know better, and are mindful of their water storage needs.

Penguin is a town on the north-west coast of Tasmania. It is in the Central Coast Council local government area and on the Bass Highway, between Burnie and Ulverstone. 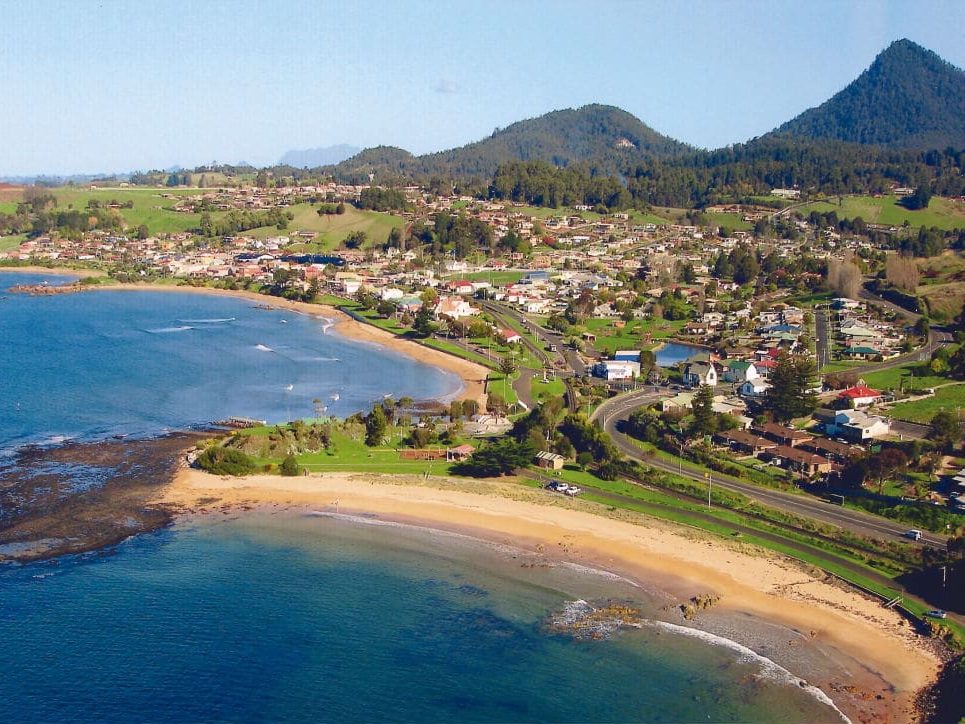 Water Tanks to Suit Every Need

With rural and domestic tanks between 12kl and 500kl, alongside industrial and commercial tanks up to a whopping 3 million or more litres, Pioneer Water Tanks offers a wide range of water tank sizes.

Pioneer Water Tanks has the product that is suitable for you in both size and quality, no matter what project you're tackling.

Bushfire Protection in the Australian Summer

Thanks to prevalent green drought, much of Tasmania is prone to wildfires, thanks to dry soil and weak vegetation, despite the verdant and lush appearance of much of the state.

An important way to prepare for the drier summer months is to ensure that you not only have a bushfire action plan, but also that you have adequate water storage to help you and emergency services protect against the threat of wild fires.

So as to ensure your water tank can be used for the purposes of both residential water storage, and fire protection, Pioneer Water Tanks offers the option of a fire reserve.

Outperforming all comers in bushfire conditions

A Pioneer Water Tank performed better than the competition in bushfire simulation when testing was performed by the Bushfire and National Hazards CRC in partnership with the CSIRO.

After thirty minutes of submersion in flame, the Pioneer Water Tank continued to hold water, a vital feature for firefighting efforts, while the other tanks tested either melted or cracked, causing their water to be partially or fully lost.

If your water tank has been exposed to fire, it is important to ensure that you get your water tested as soon as possible to ensure that it is safe for food preparation or drinking. The water would, however, still be suitable for purposes such as watering gardens or lawns.

An Ongoing Battle with the Elements

Penguin has a warm summer-mediterranean climate, bordering on an oceanic climate, with mild to warm summers, cool and moist winters and high humidity - about 70% -  year round.

The town sees an average of just over 700mm of precipitation in the average year, with the majority of this falling between the months of April and October.

Trade began when the wharf was built in 1870, allowing timber and potatoes to be exported. Penguin Silver Mine, along the foreshore slightly to the east of the town opened in 1870 but failed a year later. Neptune Mine, a tad further along, likewise failed.

In areas across Australia, especially rural and regional areas effected by drought, rainfall is usually a very welcomed sight, and Tasmania is no outlier in this fact.

However; storms causing heavy rainfall in a short time period can result in storm water runoff, especially in areas with roads and footpaths preventing the water from soaking into the soil.

If Penguin received 100mm of rain in a 24 hour deluge, it would require just 100 homes to have water tanks to keep 2 million litres of water from entering stormwater systems and contributing to stormwater runoff and flooding damages.

Proven to prevent the growth of undesirable bacteria in your water tank, the Aqualiner Fresh ® water tank liner is the only antimicrobial water tank liner available on the market, and a Pioneer Water tanks exclusive.

The natural antimicrobial properties of silver and Sanitized ® technology are woven into the Aqualiner Fresh ® water tank liner.

The Pioneer V-Lock ® tank wall profile, also exclusive to Pioneer Water Tanks, has been developed with the sole purpose of water storage.

This V-Lock panel profile is designed not only for strength and durability of the tank wall itself by engineering the sheets to the ideal thickness for each panel, but also to protect the tank liner, preventing stretching and wear as the tank fills and empties.

It's a design so good, it won an Australian Design Award for the exceptional strength and internal support, along with its aesthetically pleasing appearance.

Pioneer Water Tanks is able to provide truly local service to all Australians, no matter where they are based, thanks to the Pioneer Dealer Direct Network, comprised of more than 50 experienced water tank dealers.

In Tasmania, we are proud to be partnered with Statewide Tanks, who are able to assist with all your water storage demands.

It is crucial that our water tank dealers are experts in water tank construction, as a water tank is only as good as the person who builds it.

The town was named by the botanist Ronald Campbell Gunn for the little penguin rookeries that are common along the less populated areas of the coast.

Penguin was one of the last districts settled along the North West coast of Tasmania, possibly because of an absence of a river for safe anchorage. Nearly all travel in those days was by boat as bush made the land almost impenetrable. Many of the settlers probably emigrated from Liverpool via landing in Launceston then sailing west along the coast.

Things to do in Penguin

The town is called Penguin for a reason, and it would be silly to visit without going to see the little penguins. The beach waddling happens after dark and visitors can join tours at Penguin Point during the breeding season from September until March.

Also go have a look at the giant penguin while you're in town, one of Australia's many big things.

Not in Penguin? Click here for Water Tanks Smithton